The craft beer scene is booming – with more than 4,200 breweries In the US, small and independent craft brewers now have a 12 percent market share! Not only do some breweries offer organic beer, many breweries also have high sustainability standards – from being powered by solar energy to recycling local grain for the brewing process.

According to Food Republic the organic craft beer industry has grown by more than $30 million in the last decade. Oregon even has an annual Organic Beer Fest designed to raise awareness about organic beer and sustainable living.

Organic beer is healthier and contributes to sustainability. It just makes you feel better about what you’re drinking. But then why is it relatively hard to find?

Still, there are many breweries who decided to go organic against all odds – here are some of our North Carolina favorites who offer organic brews:

If you’re interested in finding out more about the growing local North Carolina craft beer industry, check out the documentary Brewconomy.

Beer made with renewable energy

Some breweries are taking sustainable brewing to a whole new level – with renewable energy. The Outer Banks Brewing Station in North Carolina is powered by wind energy (the first one in the US!) They pride themselves in being innovative and conscious about the environment, while helping  others learn as much as they can about renewable energy and sustainability. Their 10kW wind turbine will offset approximately 1.2 tons of air pollutants and 250 tons of greenhouse gases, according to their website.

Did you know that virtually all grain used in brewing beer gets an afterlife? Most of it as feed for beef and dairy cows. There are many more uses for it though – some finds its way into baked goods, some is used in fertilizer, compost, even as a source of energy. And in case you’re wondering – the grain is alcohol-free when collected for farms.

Talking about recycling grains – a brewery in Alaska “has installed a specially designed $1.8-million boiler that basically takes the brewer’s leftover grain and burns it to generate electricity. Hence, we guess you could say the brewery is now ‘beer-run.’ ” (Source: Takepart.com).

In 2013, Mother Earth, whose founders were committed to environmental sustainability from the very start, became the first brewery to attain LEED Gold Certification.

Mother Earth installed innovative eco-friendly solutions such as solar panels, recyclable carpet, eco-friendly tile, and insulation made of blue jeans.  Eco-flush toilets save hundreds of gallons of water each year, and run on rain water collected in a cistern. The brewery also recycles everything from spent grain (feed for cattle) and the bags the grain comes in (converted to stylish shopping bags by local artisans) to the old wooden bourbon barrels the brewery uses for aging (converted to building materials and art pieces displayed throughout the facility). 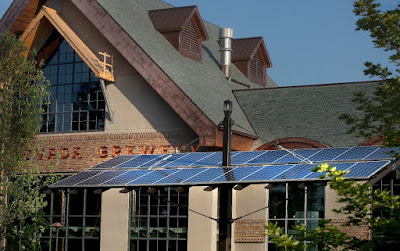 Sierra Nevada implemented a number of creative measures that were rewarded in the scoring process, including the installation of two Capstone microturbines. The machines harness the methane produced by the brewery’s on-site wastewater treatment plant for electricity generation to complement that produced by solar arrays in the public parking area and across two-thirds of the packaging facility’s roof.”

As you can see, there is a lot of green innovation going on in the beer scene. If you have any favorite breweries not mentioned here or any other brewing innovation you may have observed, please comment below.

Comments Off on Breweries 2.0 – Organic and LEED Certified